The Channel Islands are located just off the coast of France mainly in the Bay of St Malo.

They include two Crown dependencies: the Bailiwick (historic feudal divisions), of Jersey, which is the largest of the islands; and the Bailiwick of Guernsey, consisting of Guernsey, Alderney, Sark, Herm and some smaller islands. They are considered the remnants of the Duchy of Normandy and, although they are not part of the United Kingdom, the UK is responsible for the defence and international relations of the islands.

Jersey is nine miles by five miles it may not be a lot but it has a lot in that 45 square miles. The island is a mix of English reserve and French savoir-faire, cosmopolitan harbour and timeless hidden valleys, continental flair and scenes that are reassuringly familiar. Its diverse attractions and natural beauty offer something for everyone and make Jersey an ideal destination that Island hoping holiday.

St Brelade's Bay - This beautiful Jersey beach at St. Brelade’s Bay is one of island’s most popular, loved by visitors for its golden sand and safe swimming. If you’re visiting the island, you’ll find plenty to do at St. Brelade’s beach including family-friendly activities and watersports, beach cafes and seaside restaurants, beach walks and plenty of sunbathing spots.

Spectacular St. Ouen’s Bay spans almost the entire west coast of Jersey, with nothing but the rolling waves of the Atlantic Ocean between this beach and America’s eastern seaboard making this the prime spot for locals surfing. While St. Ouen is one of the least built up areas of the island, protected and by being a part of Jersey’s National Park. https://en.wikipedia.org/wiki/Saint_Ouen,_Jersey

The lighthouse tower is 19 m (62 ft) high and the lamp stands 36 m (119 ft) above high water spring tides. It was lit on 24 April 1874, for the first time, and was the first lighthouse in the British Isles to be built of concrete.[4] The lighthouse was built to designs by Sir John Coode. The beam has a reach of 18 nmi (33 km), and was automated in 1976.  It is at the extreme south-western point of Jersey in St. Brélade. The name means "a place where crows gather", deriving from the word corbîn meaning crow.

St. Aubin is a town and port in St. Brelade in Jersey, the largest of the Channel Islands. It is located on the western end of St. Aubin's Bay, on the south coast of the island, opening out into the Gulf of Saint-Malo.

St. Aubin was originally a fishing village and the historic economic centre of the island. The Jersey Railway historically terminated in the town, at what is now the parish hall. The Railway Walk, a trail following the route of the former Jersey Railway to La Corbière, starts from St Aubin. https://www.jersey.com/guides-features/insiders-guide-st-aubin

St. Helier is one of the twelve parishes of Jersey and is the capital of the island. Liberation Square is now a focal point in the town – the former terminus of the Jersey Railway housed the Jersey Tourism office until 2007. St. Helier contains cultural facilities at the Jersey Museum, the Maritime Museum and the Jersey Opera House.

Jersey Zoo (formerly Durrell Wildlife Park) is a zoological park established in 1959 on the island of Jersey in the English Channel by naturalist and writer Gerald Durrell. It is operated by the Durrell Wildlife Conservation Trust. It has approximately 169,000 visitors per year.

Jersey Zoo has always concentrated on rare and endangered species. It has mammals, birds, amphibians and reptiles, comprising over 130 species. https://www.durrell.org/wildlife/

A visit to the Jersey War Tunnels is a must to learn about and experience one of the most difficult periods in the Island’s history.The story of the German Occupation of Jersey is as compelling as it is strange to think that this small area of Britain was Occupied by the Nazis and forced to fly the Swastika for five dark years.The Jersey War Tunnels are no ordinary museum, they are an unforgettable experience. Dug deep into the hillside within St Peter’s Valley, the Tunnels were originally intended to be a barracks and ammunition store for the occupying forces. Today they tell the story of the Occupation, looking at how all sides coped under such extreme conditions and examining the daily dilemmas that were faced by island residents and the authorities, whether Jersey, British or German.

The second-largest island in the Channel Islands, Guernsey has gone to great lengths to change its sleepy backwater image, and it's working. Flatter and less dramatic-looking than Jersey, Guernsey has some stunning beaches, particularly along the north coast, rugged cliffs in the south, and a lively, compact capital of St Peter Port. There's more to Guernsey than offshore banking and cream teas: there are Neolithic graves, Victorian forts and German fortifications to explore, adventure sports such as coasteering and rock climbing are on the rise, the north coast is excellent for watersports, and St Peter Port lures visitors in with its great dining scene.

Castle Cornet was built in the 13th century, and has since been under the control of England, France, Germany and even besieged by Guernsey itself, before being handed over as a gift to the islanders from King George VI after the Second World War. Explore this 800-year-old castle and see the five museums and the four period gardens or feel free to enjoy the daily attractions that the castle has to offer.

Is the chief town, resort and capital of Guernsey and is located on the east coast of the island, where a narrow valley reaches the sea between moderately high ciffs. St Peter Port was used as a stop over on the English Channel's medieval shipping route.  And the town gradually over the centuries was built up from a port to a bustling harbour town. Take a look around the market set in the beautiful town centre of St Peter Port. There's nowhere better to savour a delicious traditional Afternoon Tea than The Old Government House Hotel, looking out over the town. https://www.visitguernsey.com/magazine/things-to-do-in-st-peter-port/

Sark is one of the small Channel Islands of Guernsey. Sark is part of the Bailiwick of Guernsey, which in turn is a dependency of the British Crown. It has a population of 600 and an area of 2.1 square miles.  Visitors to Sark have to either use a ferry or have access to a sailing boat. Cars are not permitted on Sark, but walking around isn't much of a problem as the island is only around two square miles in size.

Tractors are some of the few vehicles permitted on the island; as such, some employed with specially-designed trailers and are used to shuttle visitors up the hill from the quay. Horses always have right of way over all other traffic on Sark.

Sark's predominant official language is English, which is also the native language of most of the population.

Herm ultimately from Old Norse arms "arm", due to the shape of the island is one of the Channel Islands and part of the Parish of St Peter Port.  It is only 1.35 miles long and just under 873 meters wide.  It has several stretch of sand along the nothern coast and a smaller island called Jethou is just off the South-west coast.  Cars are not permitted on the island.  Quad bikes and tractors are used to transport heavy items.  One of the beaches not too miss is Shell Beach the colour of the sea is tropical a photograph is a must! 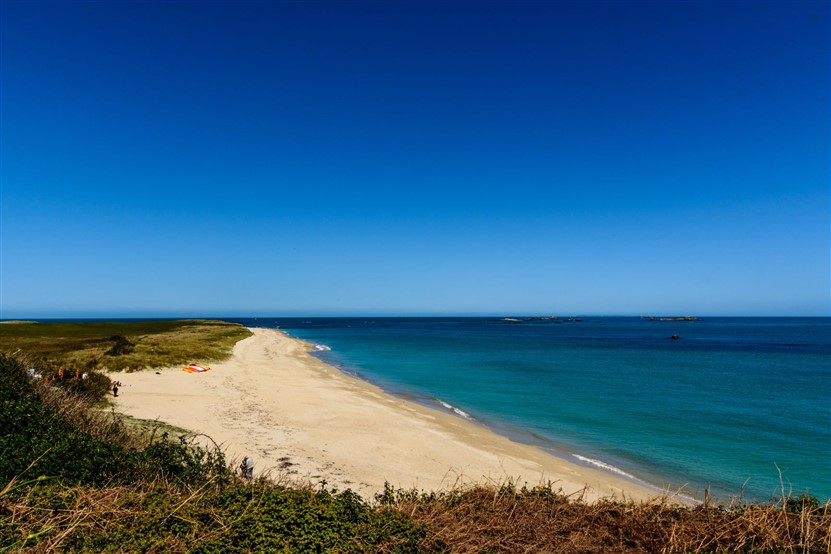 Please visit here for all Railtrails' Channel Island Tours, we are sure you will not be disappointed!