Pauline and I were invited to go on a Christmas familiarisation trip to Basel along with a group of other tour operators/agents, kindly hosted by Switzerland Travel Centre, Basel Tourism and Essential by Dorint Hotels. The trip was very useful to experience the efficient Swiss transport systems and to see what Basel has to offer. Basel is known for being 'Switzerland's City of Culture' and is the third largest city, after Zurich and Geneva. Basel is close to both the French and German borders and sits upon the Rhine. Basel offers lots of cultural activities in a small area with almost 40 museums, galleries, world-class architecture and a well preserved 'old town'. Basel is also just an hour away from the German Black Forest.

On this particular fam trip, we flew into Zurich, however Basel has a EuroAirport, situated between France and Germany and Switzerland. Basel is also very accessible by rail with Swiss Basel SBB as the main station, the French railway station Basel Bahnhof SNCF connected to Basel SBB but separated by custom barriers, and a German train station Basel Badischer Bahnhof. 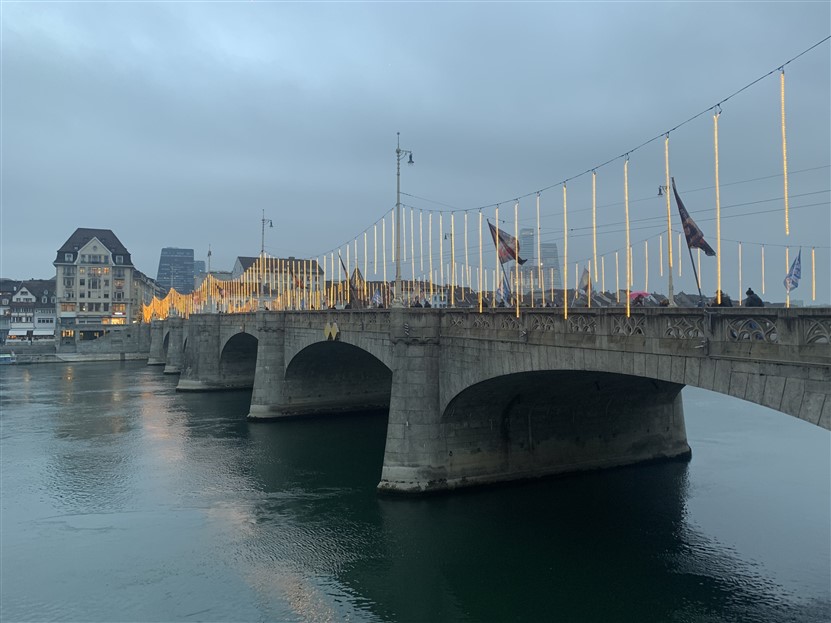 We took the train from Stoke-on-Trent to London Euston which took around 1 hour 45 mins (Avanti West Coast). We then had a taxi to Paddington Station and then from there took the Heathrow Express and checked in at our hotel for the night.

An early start today to catch our morning flight from Heathrow Terminal 2 with Swiss Air, following check-in and security we enjoyed a breakfast at The Perfectionist Cafe and then met the rest of the group at the departure gate. We flew from Heathrow at 08:50 and arrived at Zurich Flughafen 11:40. 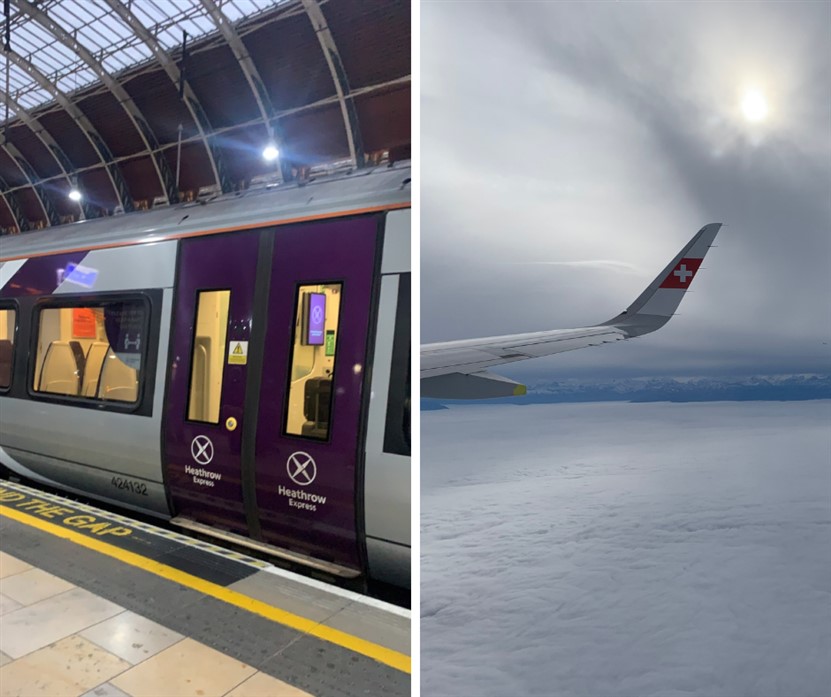 We made our way from Zurich airport to the train station and got on the train to Basel SBB (the journey took around 1 hour 30 mins). We used our Swiss Travel Pass. (The Switzerland Travel pass can be used for transport services all over Switzerland (rail, buses, boats) unlimited travel on consecutive days. The Swiss Travel Pass is available for 3, 4, 8 or 15 days) and BaselCard for transport around the city (The BaselCard offered as a free bonus with Basel Hotel bookings at check-in. With the Basel card you can use public transport for free, free Wi-Fi at hotspots, 50% off entrance fees for museums/zoo/theatre and guided sightseeing tours of the old town). 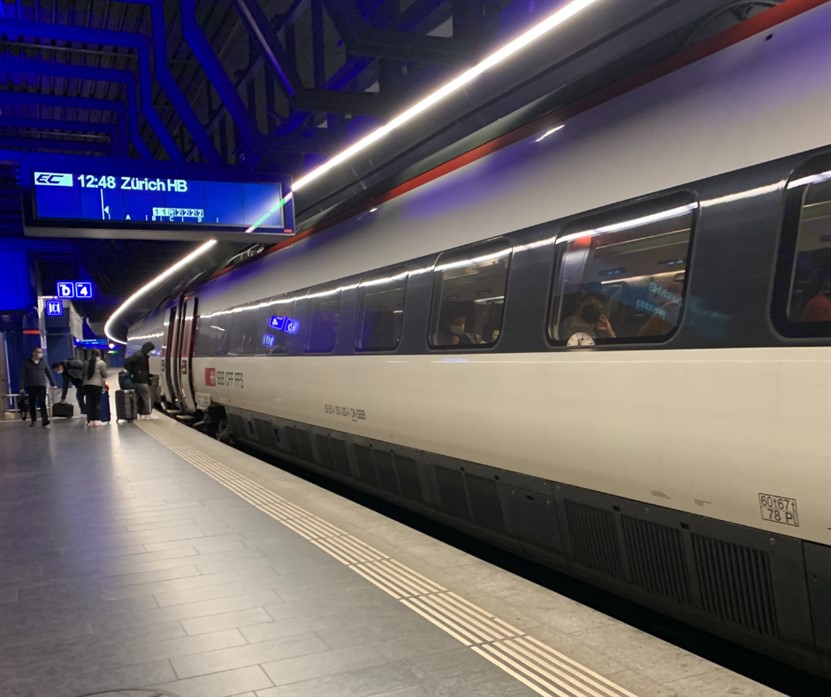 On arrival in Basel we took the tram from the station to the Essential by Dorint Hotel Basel City, which was situated just 15 minutes from the centre, we checked in and dropped our bags off then headed straight out for a guided tour of the city. 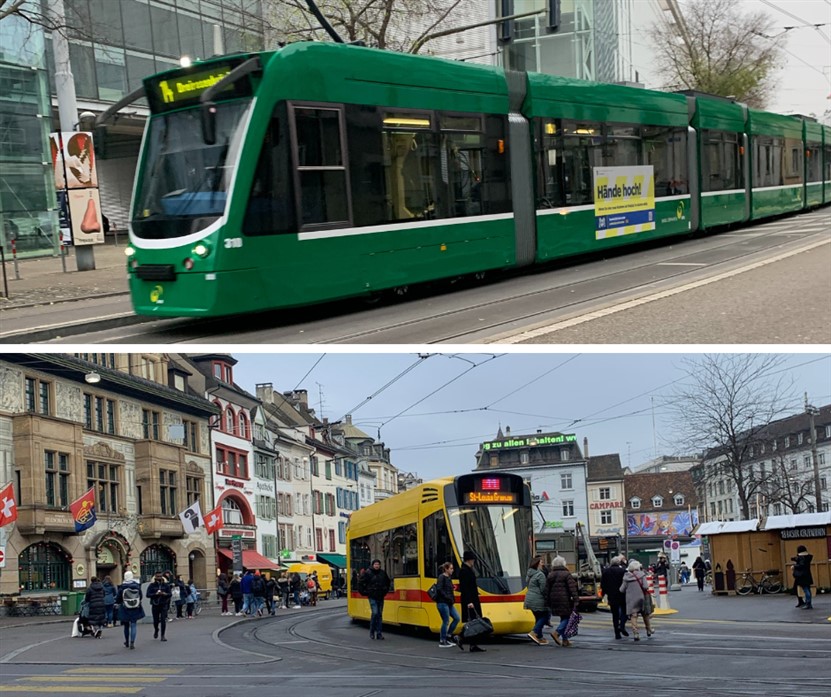 Basel is also well known for being the 'pharma hub of Switzerland' and was the start of the pharmaceuticals industry in the 1800's, growing out of chemical dyes and textiles and production of silk ribbons. They used the chemical knowledge to create pharmaceuticals. The most well-known company in Basel is Roche (that still produce pharmaceuticals). Roche has the tallest tower in the country which overlooks Basel and the Rhine. 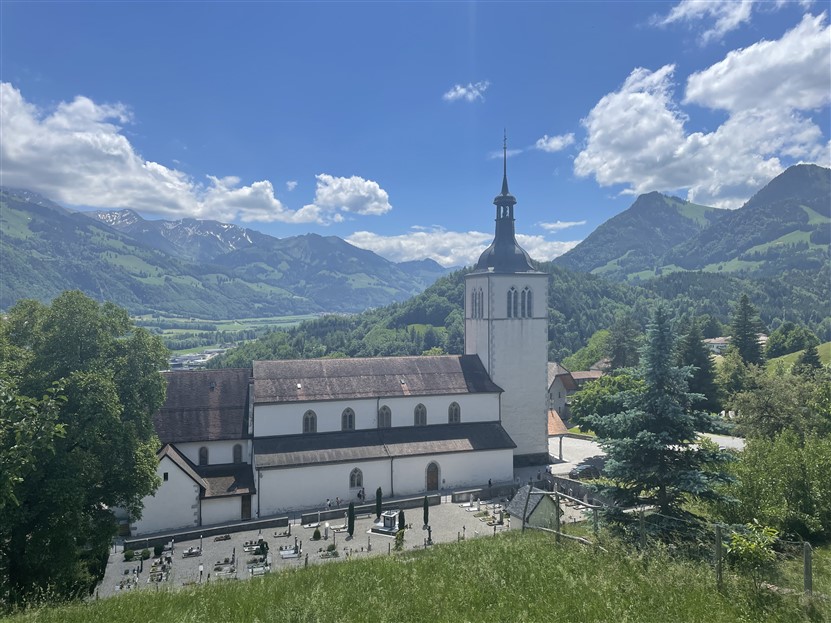 We explored the old part of the city, some of the buildings dated back to 1300's, we looked around some of the streets in the old town, many of which are named after the people who originally lived there, like 'Pfefferplatzchen' where the Spice traders use to live Pfeffer translates to Pepper. Many of the buildings and architecture have red sandstone around the windows and doorways, which makes the buildings unique and iconic to Basel. 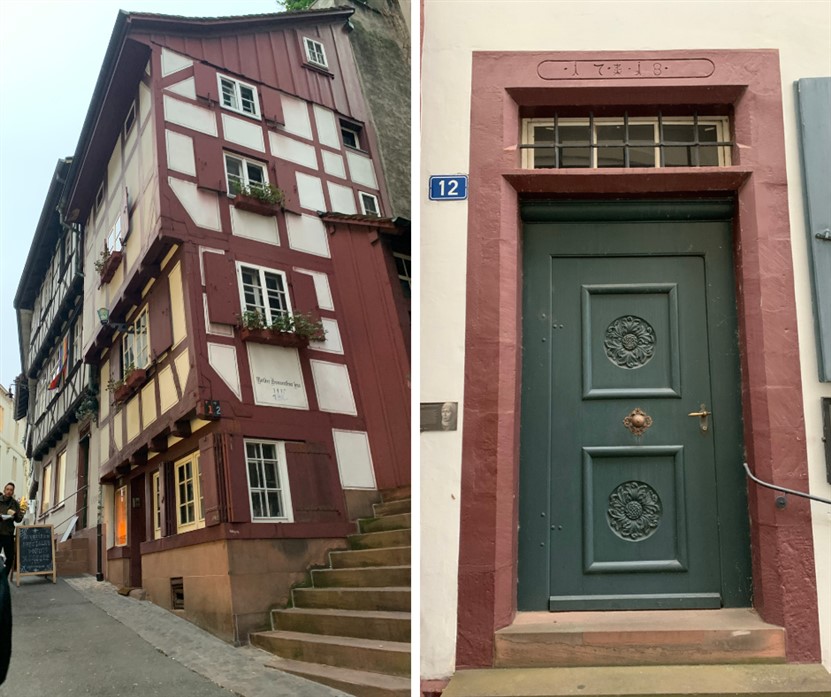 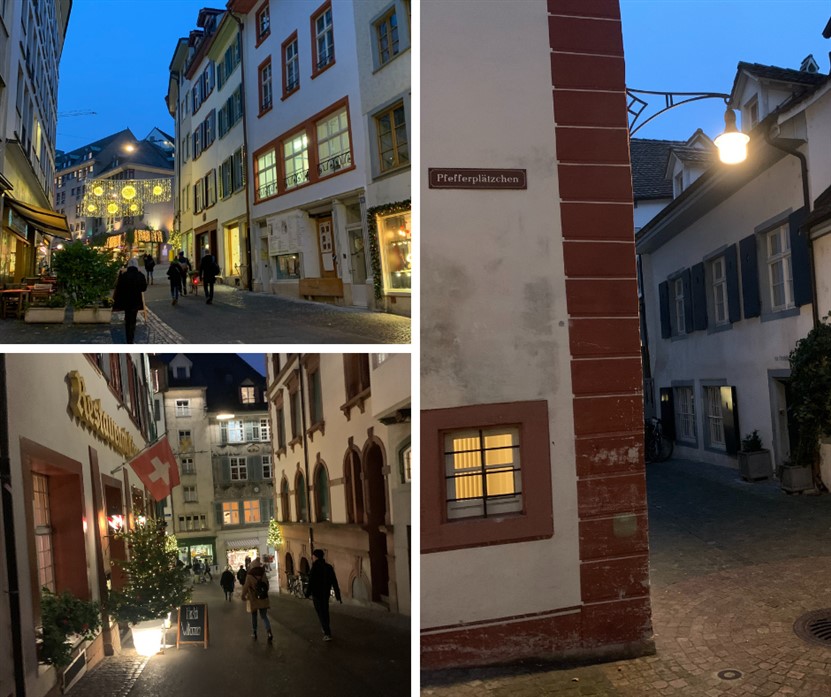 Some of the main buildings we visited were: Minister 'Basler Münster' which dates back over 1000 years and is still used now for services, and the Town Hall (Rathaus Basel), which is used by the Basel governing body and over the festive period has a huge, illuminated Christmas tree. 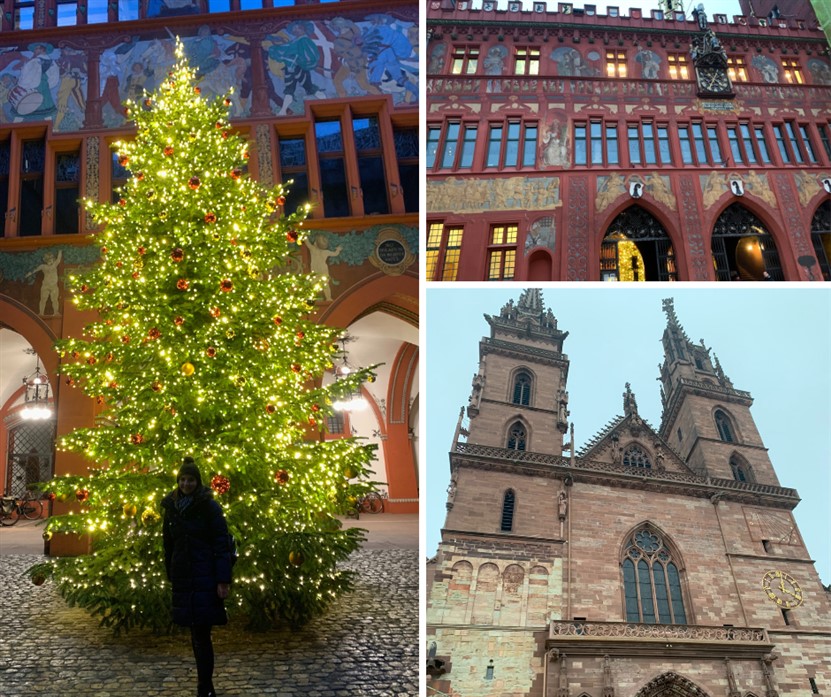 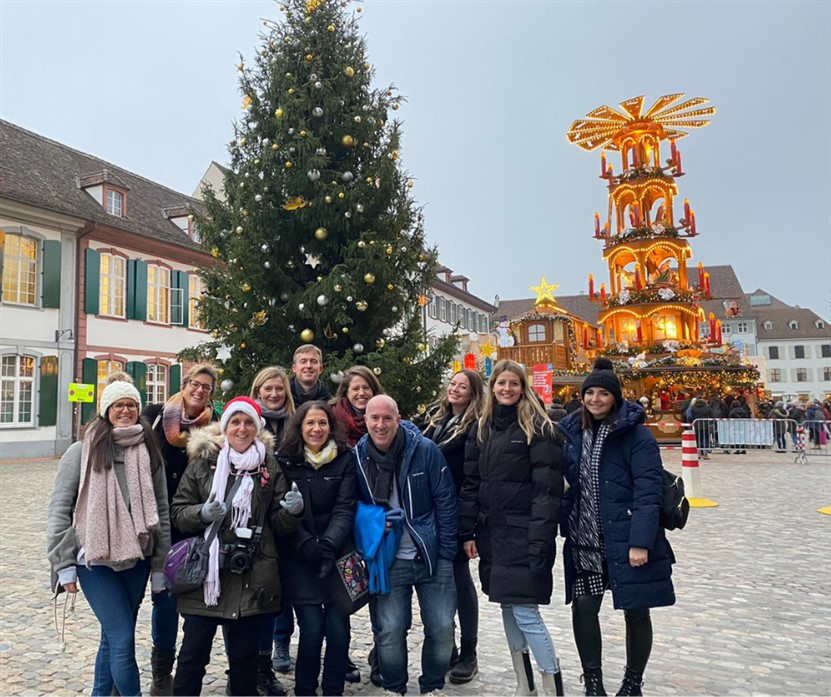 Following the guided tour, went in to the Münsterplatz Wiehnachtsmarkt, which claim to be the best Christmas markets in Europe, we warmed up with a gluhwein and a traditional fondue dinner. 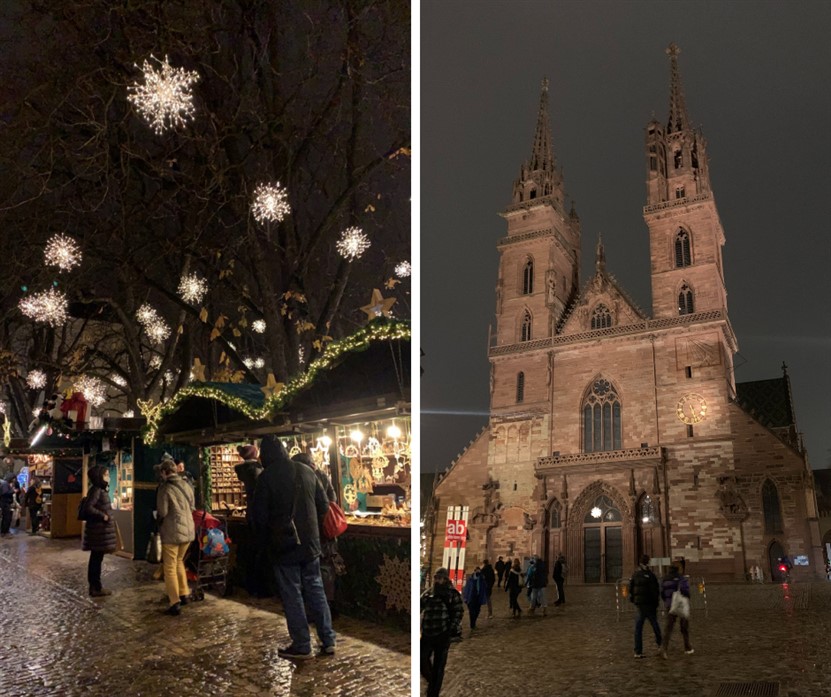 Following breakfast we were invited to tour the hotel with the Director of Sales and then got the tram to the Spielzeug Welten Museum (Toy Museum). We had a guided tour around the museum which was very interesting. The museum has a huge collection of toys, teddy bears and wooden handcrafted dolls houses dating back to the early 1900s. There was also a collection of Steiff bears at the museum, and a wax work of Mrs Steiff. 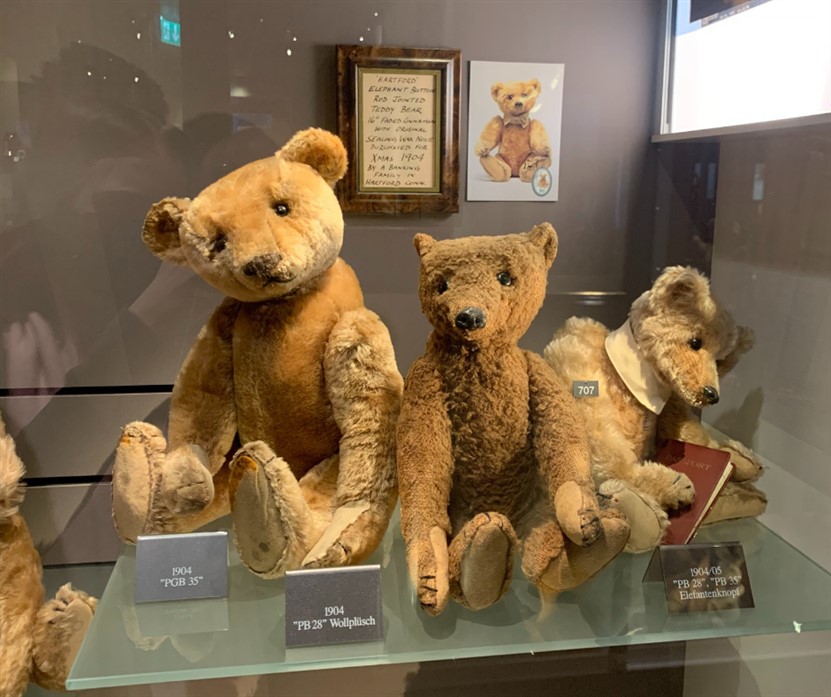 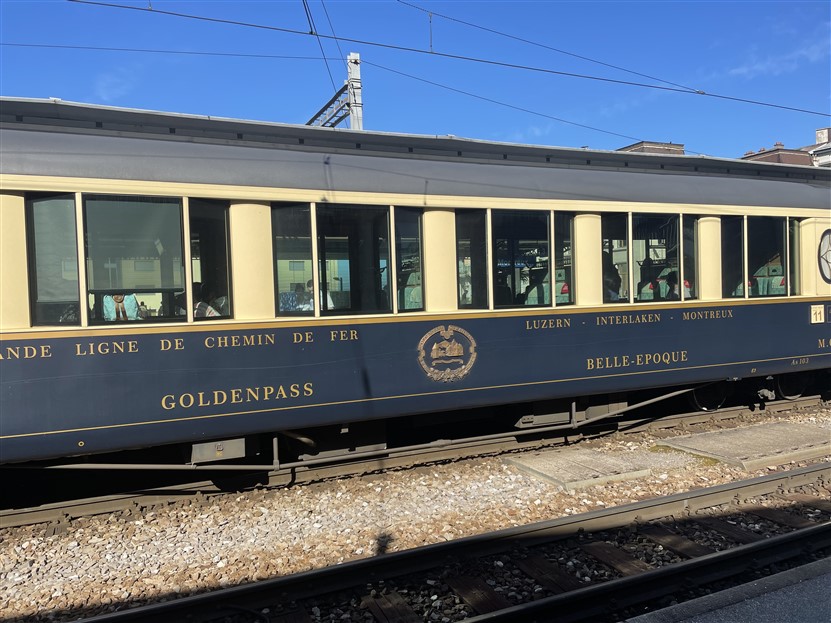 After the museum, we had lunch at Kohlmann’s where we enjoyed a selection of traditional 'firecakes' and then in the afternoon we had some free time. Half of the group chose to look at some of the urban art, local boutique shops around Spalenburg, including the world-famous Christmas decoration shop 'Johann Wanner' and the others visited galleries and went back to the Christmas markets. 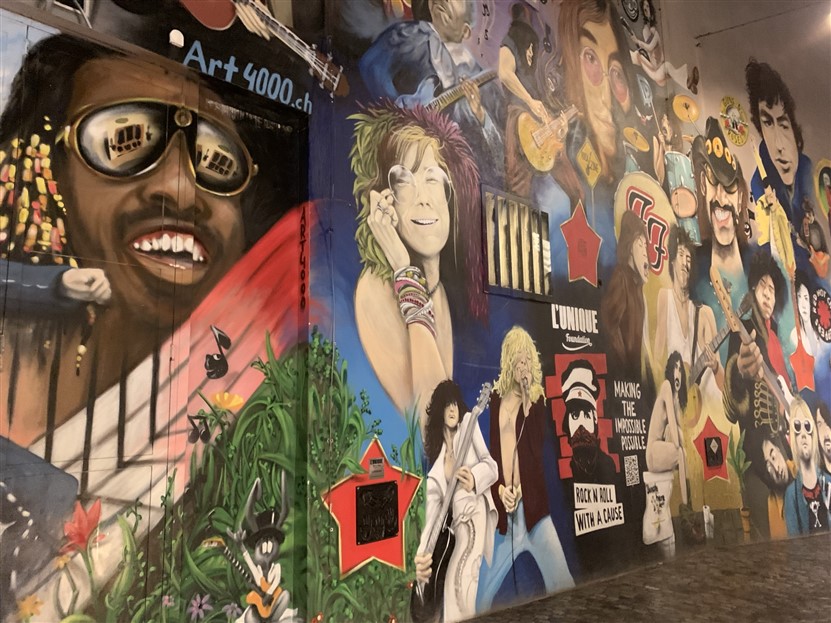 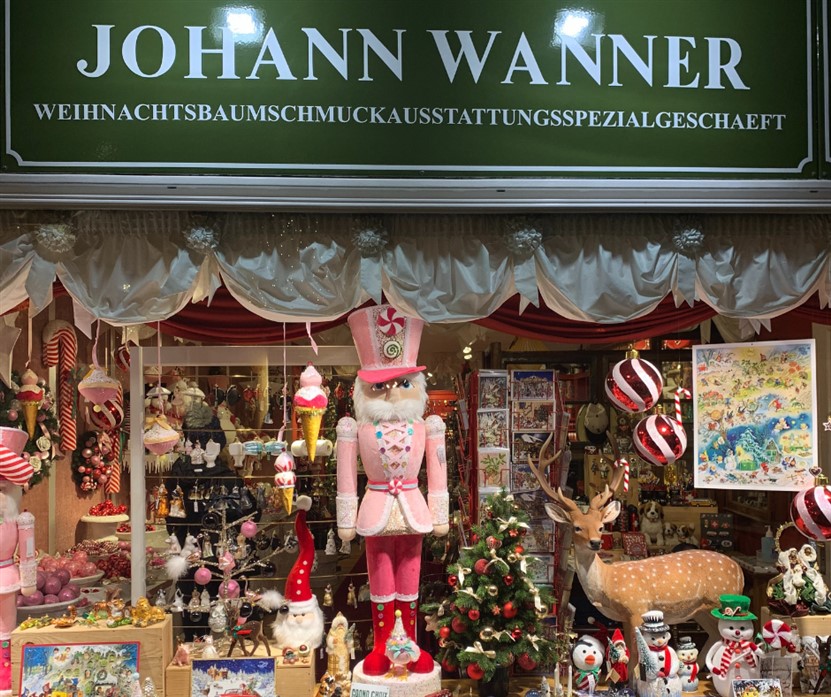 We headed back towards the riverside for the Rhine boat cruise with our 'This is Basel' host. The cruise was a great way to see the city and festive lights, it was a chilly night, but we had unlimited hot gluhwein to warm us up. We headed back into town, where we enjoyed a regional dish at traditional Swiss Restaurant Löwenzorn. 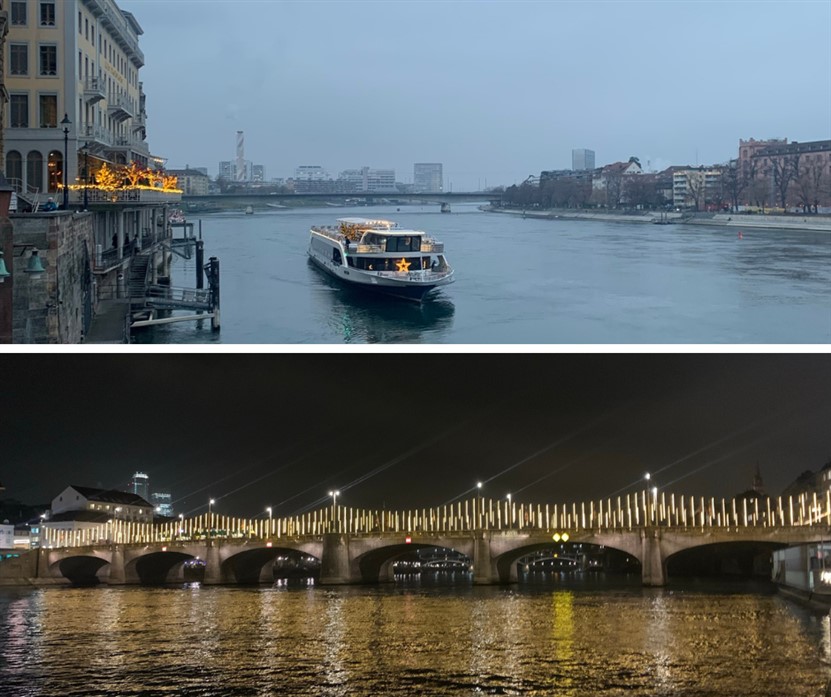 We had a quick breakfast and checked out of the hotel and made our way to the chocolate workshop of Brandli. Brandli is a family run Swiss Chocolatier, since 1935. Our guide took us on a 'journey through chocolate' and we learnt about the history, purpose, and origins of chocolate with a tour around the workshop, followed by sampling different Swiss chocolates and finishing off the morning making our own chocolate bars to take home. We had a quick lunch in the Markethalle close by to Basel SBB where we then boarded our train back to Zurich Flughafen to catch our flight back to Heathrow. 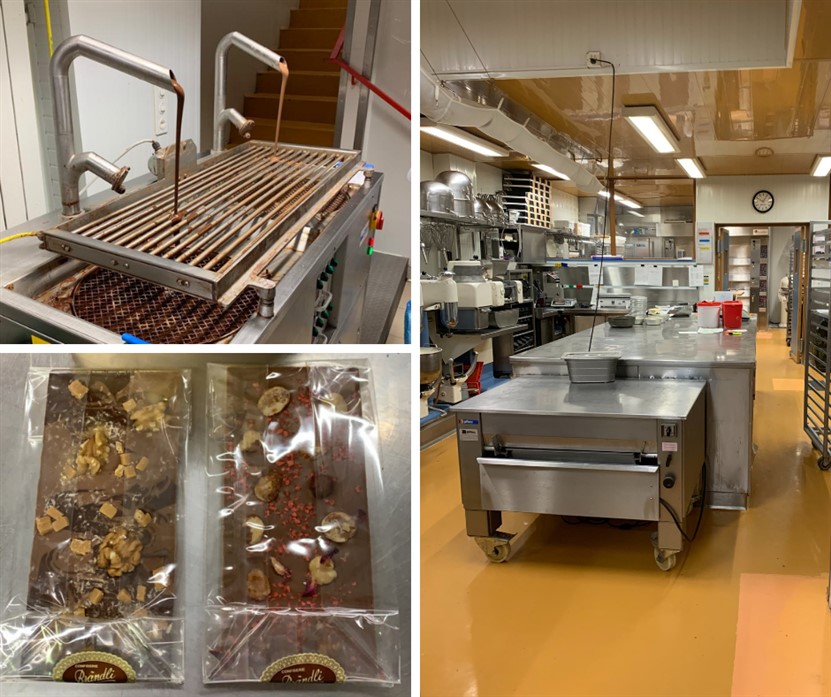 We travelled from Heathrow, Hounslow to London Euston and made our way back to Stoke-on-Trent on Avanti West Coast in the first-class coach. 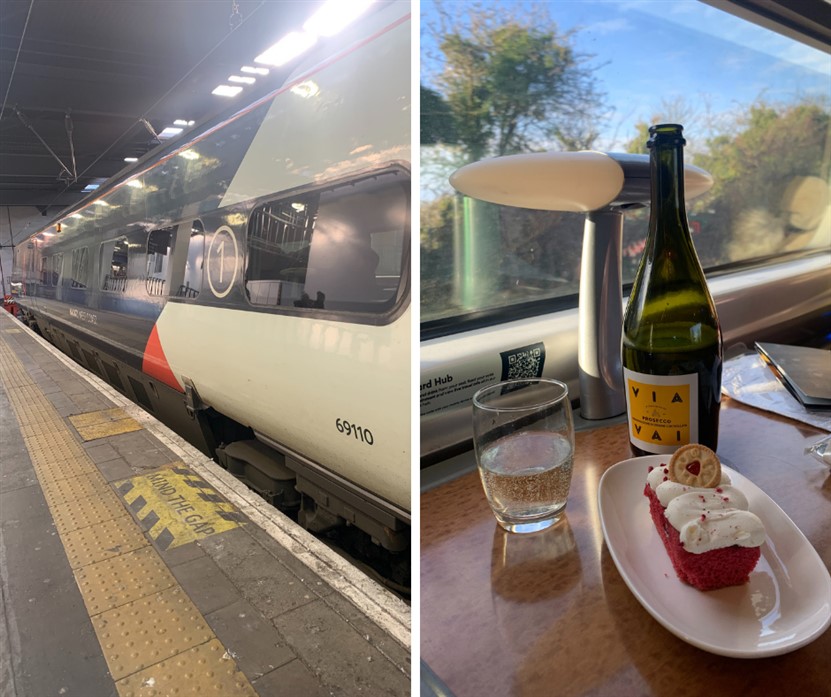 It was great to travel to Basel and to experience their transport systems and the different attractions and excursions they have to offer. Although we dont currently have a tour to Basel, we do have a number of Swiss Rail tours here