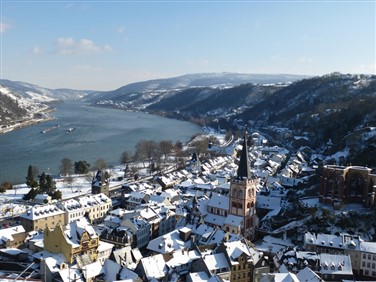 Celebrate the New Year in style in the wonderful Rhine Valley with a New Year's Eve party night including a 5-course dinner, live music, fireworks and a free bar! Uncover Remagen's history on a guided walk with our friendly hotelier, sail along the Loreley Valley from beautiful Boppard, climb through the Ahr Valley by train and experience the Vulkan Express with a glass of sparkling wine. Here's to a New Year of good health and great company!

Also included in your Tour Fare:

We depart London St Pancras by Eurostar, speeding across Kent and towards France. Our Eurostar terminates at Brussels, where we change onto a high-speed train into Germany. Our hotel for five nights is the Hotel Pinger in the Rhine riverside village of Remagen.

Today we travel up the scenic branch line from Remagen to the walled village of Ahrweiler in the red wine producing Ahr Valley region. After a little free time to explore the village, we continue to Mayschoss, which is home to the world's oldest wine co-operative with almost 150 years of history. We include a wine tasting and lunch platter at the winery, before returning to Remagen for dinner.

New Year's Eve - On New Year's Eve we take the train along the Rhine to Brohl, where we join the Brohltalbahn. Otherwise known as the Vulkan Express, the line meanders up through the Brohl Valley into the Eifel Hills, whose dramatic rock formations were created during a period of volcanic activity. The Vulkan Express operates a heritage diesel train on New Year's Eve, climbing up to the terminus station at Engeln. After some free time, we return to Remagen for our New Year's Eve Party with 5-course dinner, live music and complimentary bar. Watch the fireworks at midnight with a glass of sparkling wine, followed by warming soup as we ring in 2021 in style

New Year's Day - Today we spend a relaxing New Year's Day in Remagen, where the day begins with a guided historical walk around town in the company of our hotelier, including a warming mug of glühwein. In the afternoon we can enjoy a stroll along the nearby Rhine promenade ahead of dinner at the hotel.

Travelling southwards along the Rhine to the beautiful riverside town of Boppard, we join one of the river cruise ships for a round trip along the most scenic part of the Rhine Gorge to the famous Loreley Rock.

Leaving Remagen, we change trains onto the high-speed line in Cologne. In Brussels we join the Eurostar service to London St Pancras.

Conveniently situated for Remagen’s centre and its railway station, yet just a short stroll from the Rhine Promenade, the family-run Hotel Pinger is very much the hub of this small Rhineland town. The hotel boasts a traditional restaurant, bar and coffee shop. The Pinger brothers are the third generation to manage the hotel, which was bought as a restaurant by their grandfather and converted into a hotel after WWII.

Below is a list of pick-up points available on this tour.

Below is a list of pick-up points available on this tour.

It is not possible to display the map. This may be due to Google Maps not being supported in your browser.

Search The location was not found

There are currently no departures available on this tour.

The website timed out while searching for the departure dates. Please try again. 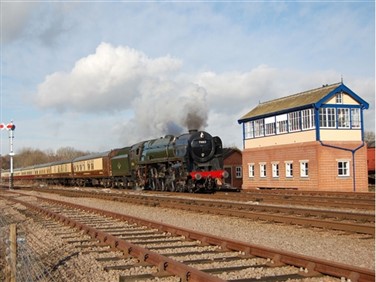 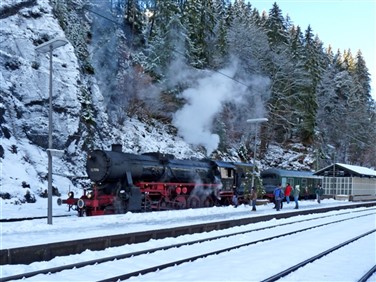