Yes, I know it’s a long way off, but I thought I would give you an insight to whet your appetite for my favourite country having been to Australia a number of times and taken this tour on a few occasions. So I’ll take you through the tour day by day.

Day 1 - Singapore Airlines is in my opinion one of the best in the world. I’ve used it before to get to Australia and connections just work perfectly. They use the big Airbus A380’s with plenty of leg room and excellent food and service. I was in Sydney when the volcano went up in Iceland some years ago and everything stopped, they were one of the very few airlines putting passengers up in 4 and 5 star hotels (at no expense to the passengers) and keeping all informed.

Day 2 - It is a long way but getting into Melbourne in the evening gives all a proper night’s sleep on arrival.

Day 3 - Awake in the heart of Melbourne, just across the road from Southern Cross station (with a few tram tracks between). The station is amazing, one of the most "open" (in the literal way) with huge glass sides so you can see right into the building. It replaced the Victorian Spencer Street station about 20 years ago. I remember the old one – all wrought iron and red brick.

Today is a free day (to recover from the long flight). The Circle Line tourist tram uses vintage W class cars and has the great advantage of being FREE (a rare thing these days!) – very useful for getting to know the city. The tram system is huge. Worth visiting is the enormous Queen Victoria Market, the largest in the Southern Hemisphere – wonderful, or Melbourne Gaol for info about outlaw Ned Kelly. In the evening Melbourne has probably more restaurants than any other city I can think of, and being a very cosmopolitan place has so much variety. Recommended is one situated in an old police station just a short walk from the hotel – classic Australian "bistro" style where you order the food at a "hatch", then drinks at the bar. It’s part of Aussie culture and always great value for money. By the way try Cooper’s beer especially the stout. You could always take the tram to St. Kilda for a meal returning by a different route. Alternatively try one of the restaurants along the banks of the Yarra River (again a short walk from the hotel). Not necessarily cheap but a great experience. (They do a fabulous firework display along the river on New Years’ Eve which I will never forget). 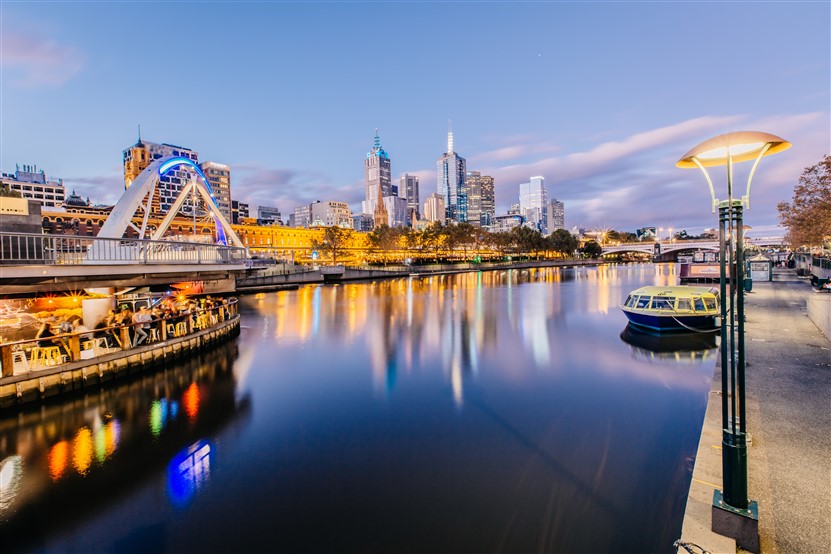 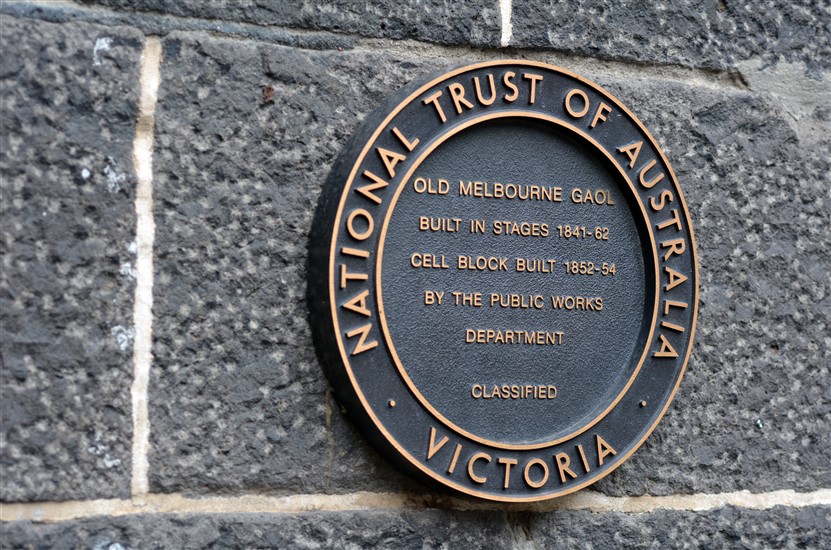 Day 4 - Our first proper train ride in Australia – we’re on the broad gauge (5’3") riding one of their "Velocity" diesel railcars out to Castlemaine (no not the one named for the beer -that’s in Queensland). Here there is a cross platform change to the Victoria Goldfields Railway for a steam ride through typical rural country (eucalyptus trees and scrubland) to Maldon. This is a town set in a time warp, with classic turn-of--the-century buildings. Lots of eateries/drinkeries – I can recommend trying "iced coffee", very refreshing. Back by steam to Castlemaine, then (subject to schedules in 2023) we should be loco hauled into Melbourne. 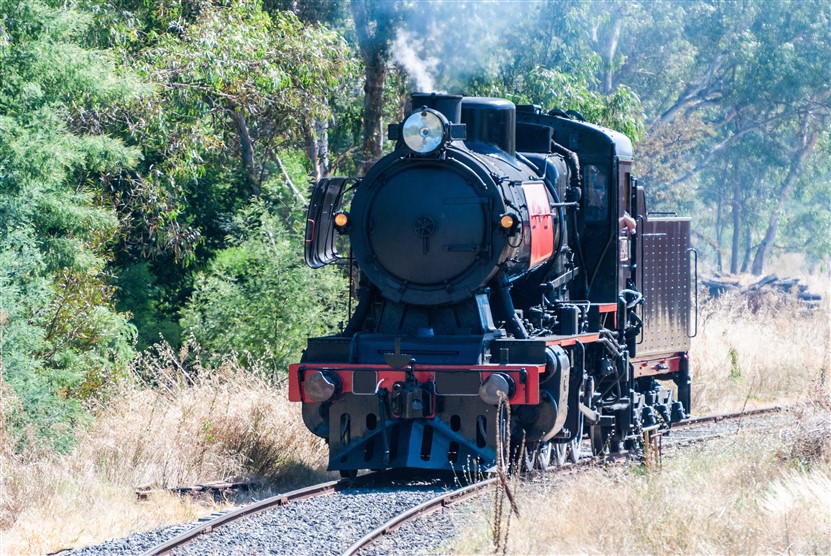 Day 5 -  We ride a local suburban train to Belgrave for the well know Puffing Billy Railway. Watch the locos being prepared before riding the first train of the day. Usually double-headed, they really have to work hard up the gradients through the trees with the occasional bit of wheel-slip on the morning damp track in the forest to add to the excitement. It’s a one-hour trip to Lakeside station where we have a little time to look at the model railway, relax with a drink, or stroll around the lake before boarding the one train of the day to Gembrook, the end of the line 40 mins away. Admittedly there is not a lot at Gembrook but the ride from Lakeside is worth it especially the wooden trestles. 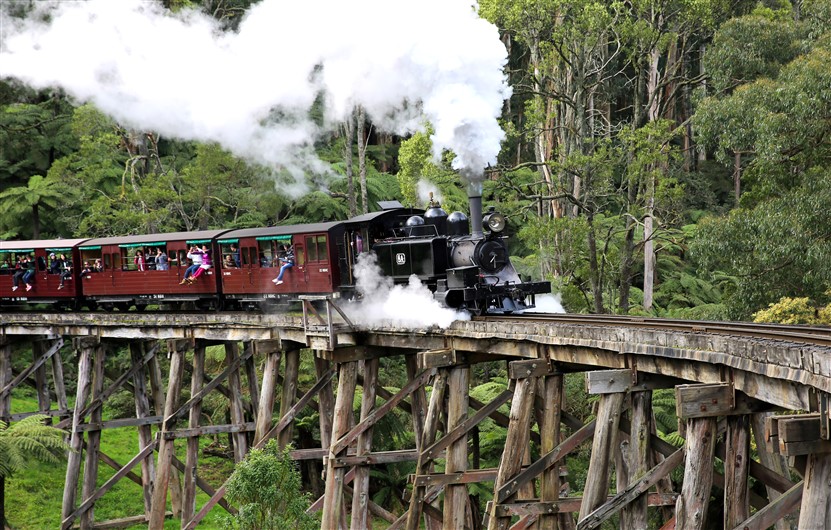 Day 6 - A busy day today. By private coach to Queenscliff situated on the southern part of the huge circular bay the protects Melbourne from the ocean. We have a charter train on the 3’6" gauge Bellarine Railway, we’ve requested the lovely "T" class 4-8-0 in black livery which has recently undergone its 5 year overhaul so should be in good shape! After photo run-bys on the line to Drysdale we call in on the return at their loco and rolling stock shed for a private viewing. Its light and airy inside so good for photos. Hope to meet up there with David Price, a fellow railway modeller, who used to be the manager of the line for an insight into their operations. We jump back onto our coach for the drive to Williamstown for the Railway Museum. This was very rundown in the past but has had a "spruce up" and is now well worth the visit. All their collection of broad gauge locos are outside so once again good for photos though a little cramped for room. Literally just along the road are the historic Newport Workshops of Steamrail Victoria with their fleet of operational steam, diesel and electrics. The site is under threat of closure as the valuable land, still owned by state rail operator VicRail, is ideal for building. We have a guided tour of the workshops (they usually supply copious quantities of much needed coffee too!) before returning to the hotel. 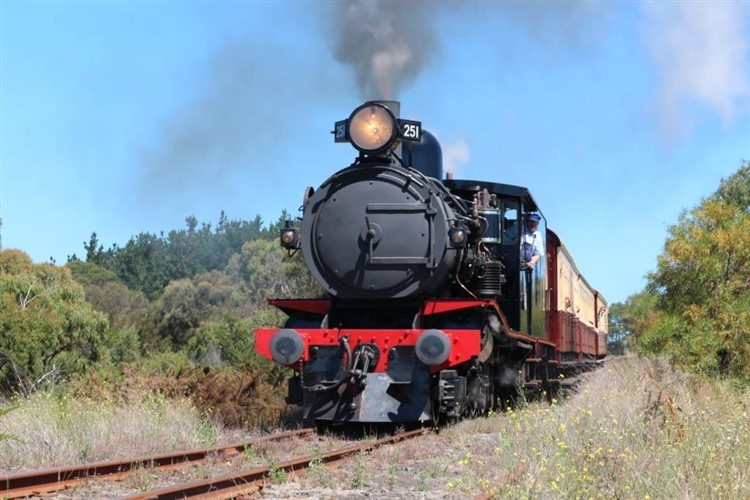 Day 7 - After all the activity yesterday, we have a relaxing full day train ride of 538 miles to Sydney in 1st class on board one of the XPT sets (basically an Aussie-bult HST). One of the "quirky" Aussie customs is the offer of a Devon Cream Tea from the café car on board. They also serve a selection of lunch to your seat.

Day 8 - A ride out of Sydney on a suburban train south along the coast to Albion Park, great views as the track is high on the cliff top - quite a few coal trains from the south of NSW take this route too. Here we have an exclusive visit to the 2ft gauge Illawarra Light Railway including a steam charter. It’s only a small set-up with a circle of track running through the woods but a friendly bunch of people and a lovely collection of engines. It will be interesting to see if they have completed an extension they were talking about towards the local airfield (which is also an aircraft museum).

Day 9 -  We take another suburban train this time over the scenic and steeply graded line into the Blue Mountains to Katoomba for the trio of attractions that form "Scenic World" – a horizontal cableway across a deep gorge, a normal funicular and an incredibly steep former mining funicular both taking you to an amazing walkway through the rainforest. If the ZigZag Railway has reopened near Lithgow there may be an opportunity to visit there instead for a steam ride along part of the old track formation over the hill. They have suffered two devastating forest fires which damaged the track, loco shed and stock but hope to re-commence operation during 2022. 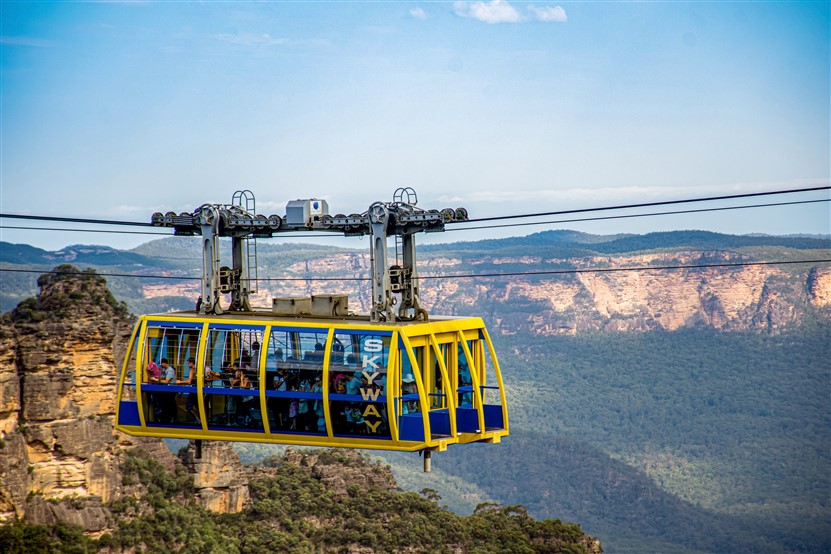 Day 10 - A free day in Sydney. The group will have an "Opal" pass for unlimited travel on trains, ferries, trams and buses. Lots to see and do, one of my favourite trips is the Catamaran from Circular Quay to Parramatta, the longest boat ride in Sydney, then train back to the city centre continuing over the famous Harbour Bridge, walking back over the bridge for great views of the Opera House and the ferries plying back and forth, finally walking down through the historic area called "The Rocks" back to Circular Quay. For transport interest the Loftus Tram Museum can be reached by train, with their collection of over 30 vehicles. Today is an operating day. An evening option is to take the Manly Ferry for a meal by the ferry dock there, returning after dark for fabulous views of the illuminated Opera House and Harbour Bridge.

Day 11 - Electric suburban to Campbelltown then, diesel railcar to Picton. From here we have arranged for a classic 1920’s wooden railcar to take us up the branch line to Thirlmere for the New South Wales Railway Museum. I recall one year the railcar was stuck behind some stock so they brought the whole "Southern Aurora" train set down to Picton for us – a 12 coach train with locos topped and tailed just for 30 persons! At the museum we have a private guided tour of the huge collection, plus lunch before riding our chartered steam hauled train to Buxton and return – with a run-by of course.

Day 12 - Back into the Blue Mountains to Valley Heights, another friendly set-up, where we have an exclusive charter of the 1891 Sydney Steam Tram. The conductor is the local undertaker and certainly looks the part! More cream teas (this is not a tour to lose weight on) and a look around the rest of the collection finally enjoying a meal in the roundhouse. 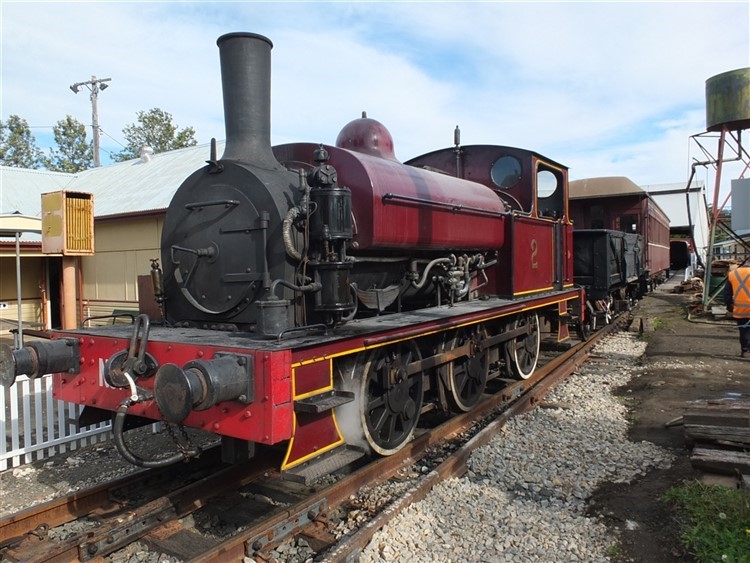 Day 13 - We leave Sydney and head north to Newcastle – a two and a half hour ride. The route climbs into the hills before descending to cross the Hawksbury River. I recall my wife and I hiring a boat for a few days to explore the creeks in the area. The railway line used to go all the way into Newcastle but some years back was terminated at what they call Interchange (too many level crossings to contend with), luckily our hotel is just a short walk away. The town now has a modern tramway. Just around the corner from the hotel is another of those value-for-money Aussie "bistros".

Day 14 and 15 - The reason we are up in Newcastle is for the incredible 2-day Maitland Steam Festival. The main feature is mainline steam running, imagine slotting a number of steam trains between heavy coal trains (there is probably a double headed coal train every 10 minutes heading for the port to be shipped to places such as China). The highlight must be riding the "great train race" along the four-track main line – great for videos of steam at speed. In addition there are traction engines, street markets and visits to the nearby Richmond Vale Steam Railway. 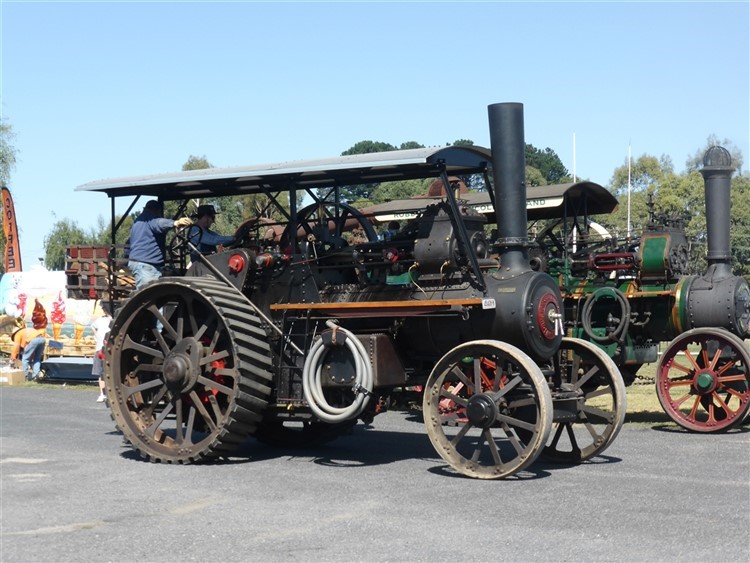 Day 16 - After all that excitement its time to go home taking the train to Sydney Airport for the Singapore Airlines flight back to Heathrow, or while "down under" why not ride the famous "Indian-Pacific" train across a continent to Perth, or continue north from Maitland to Brisbane – so many choices!

Click here to read more info about our Australia 2023 tour!